by Dan Roem, The Gainesville Times

“The development of Patriot High School off Kettle Run Road in Nokesville is raising concerns about the impact of two new traffic lights on Vint Hill Road.

“Prince William County Board of Supervisor Wally Covington (R-Brentsville) said Monday that he plans to ask the county’s Department of Transportation to study the intersections of Vint Hill Road with Sudley Manor Drive and with Kettle Run Road,

” ‘I’m expecting some very large backups on Vint Hill Road,’ said Covington, adding that he drives the road daily. ‘The stoplights there are going to put a fair amount of pressure on those roads.’

“Covington said he was not sure about the exact date that the lights are set to be activated, though he did hear that they are likely to start functioning before Patriot opens in late summer 2011. He mentioned that he supports the lights for child safety but he said he would still like traffic alternatives to alleviate congestion.

“The second-term supervisor also said he expects Fauquier residents ‘are going to be the majority of commuter traffic’ affected by the lights.

” ‘It’s going to change the way people deal with that corridor,’ said Covington.

“Commuters heading westbound from U.S. 28 can potentially avoid the lights by either taking Linton Hall Road to the north or Fauquier Drive Dumfries Road to the south.

“Eventually, further west, Rollins Ford Road is due to be extended to connect Linton Hall Road and Vint Hill Road.

“Paving and partial widening are likely to be completed on Glenkirk Road be the end of October [2010], according to Covington. That would make three roads connecting Vint Hill and Linton Hall.

“However, even after the improvements, Glenkirk will still not be the most ideal road for heavy commuting as it passes an elementary school and is still quite windy.

” ‘I don’t think it’s a long-term solution to anything,’ said Covington.  ‘(It’s) not a transportation solution for the volume of traffic that’s coming in from Faquier.’

“Another problem for Vint Hill Road commuters, as Covington mentioned, will be the frequent bus stops along the road. Because Vint Hill runs along the Rural Crescent, houses are more spread out so there are no group bus stops where a large number of children get on and off the bus together.

” ‘You have a lot of bus stops on Vint Hill Road (coupled) with those lights and you’re going to have a lot of traffic on that road,’ said Covington, calling the scenario a ‘weakness’ for roads within the Rural Crescent.

“According to Graham, Fauquier’s elected officials have no problem ‘four-laning’ Vint Hill Road, ‘but unfortunately, the majority of the road is in Prince William County. That’s the nature of the beast. We’re in a totally different region than Prince William as far as VDOT is concerned,’ he said.

“Covington and Graham disagree on one way to alleviate congestion along Vint Hill Road. Covington supports the creation of the Buckland Bypass to Gainesville and widening part of Vint Hill Road out to four lanes near U.S. 29.

” ‘It’s my position that we need to do both,’ said Covington. ‘On the Fauquier side, there needs to be a plan that comes together with Prince William that (figures out) how we’re going to connect with Vint Hill.’

“Graham says he objects to the Buckland Bypass because it would run through Fauquier farms.

” ‘It helps him bypass something they created which is Gainesville,’ said Graham. He later added, ‘It was Prince William that created the debacle.’

“The Fauquier side of Vint Hill Road is slated to, over time, double in size once it is completely developed, according to Graham. He explained that there are around about 3,000 residents there now.

“He blamed the General Assembly for inadequate proffer laws, which means less money coming into Fauquier’s coffers out of Northern Virginia and Hampton Roads for pushing a proffer system that he said ‘ties everyone’s hands up.’

“Covington and Graham presented different views on Fauquier’s contribution to growth and development in the area.

” ‘Fauquier has put a lot of growth there and a lot of growth in New Baltimore,’ said Covington. ‘They’ve done virtually nothing to mitigate or to plan for the growth (and are) relying on us.’

” ‘We’re working on a comprehensive plan,’ he said, adding that the county is studying potential improvements for Vint Hill Road, Route 28 and U.S. 29. ‘We’re doing a traffic count right now to check on our flow of traffic.’

“He mentioned the development of the Vint Hill parkway and widening of Dumfries Road in one area as some of the changes being made to the general corridor. Dumfries Road is set to eventually be widened section-by-section from U.S. 29 in the west to U.S. 28 in the east.

” ‘Again, that’s money and we use a significant amount of our money to buy into the cost-share plan with VDOT to improve that,’ said Graham.

“That said, counties surrounding Fauquier are growing at faster rates that Fauquier, meaning commuters for Culpeper and Madison counties are driving through Fauquier on their way to Prince William, creating even more congestion from further away.

“In the long run, that will negatively affect Vint Hill Road, according to Covington.

” ‘(That will) continue to add traffic to that road and it’s not going to be able to sustain the level of housing in Fauquier that’s going to influence it,’ said Covington. ‘At some point, we’re going to have to deal with it.’ ” 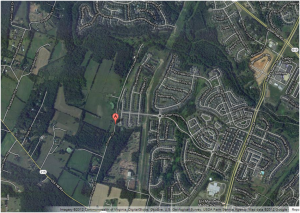