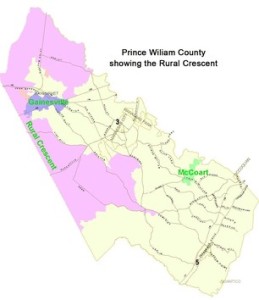 “The very diverse rural area in Prince William County should be preserved, past zonings have had mixed impacts and the county should consider hiring an economic development director who’ll focus on agriculture.

“These are some of the observations reproted May 6 to the county board of supervisors at its public meeting in McCoart Government Center by consultants hired a year ago to study the rural area.  Consultants were Clive Graham and Dr. Tom Daniels of Environmental Resource Management (ERM), Annapolis, MD.  Daniels also is professor of city and regional planning at the University of Pennsylvania.

“Ray Utz noted May 9 the consultants will give the county their final anlaysis in the next few weeks.  The county’s planning department will study the report and suggest to county officials how it could be implemented.  Utz is the county’s director of long-range planning.

“Graham told supervisors the county today has ‘one size fits all’ regulations that do not ‘respect the lands of the rural area.  The zoning policy has mixed impacts.’

“Chris Price, county planning director, pointed out that today the county does not look at the outcomes of develoment in the rural area.  ‘We plan in the development areas for outcomes, but not at all in the rural area.  It’s on a case-by-case basis,’ Price said.

” ‘We need to save the rural character,’ he asserted.  Graham pointed out, ‘we can make a harder edge’ to boundaries in Nohe’s area.

“Price told the meeting the county’s efforts at rural preservtion date from 1964, and those strategies are a mix of guidelines, standards, policies and ordinances.  Many are not measured nor evaluated against best practicies and many are not data driven.

“The planning director said this purpose of the consultant’s study was to get a look at and evaluate the county’s rural preservation policies, to identify any tools that could be used and to recommend possible changes to the county’s land use planning documents.  He added it is a good time for the county to look at and change its rural policies because the pressure from development has slowed.

“Graham reported past zoning impacts have been mixed, with some residents believing they ‘have killed agriculture,’ were ‘a property taking’ or that ten-acre parcels were ‘too small to farm, too large to mow.’  He pointed out the county’s zoning policies have been good on balance, and have cut development in the rural area.  He said unintended consequences of the rural zoning policies have resulted in a loss of agricultural land and have used land in large amounts.

“The consultant explained zoning alone won’t save preservation goals, and that much development occurs without design review and leads to lost opportunities.

“Daniels told the meeting there is farming in the rural area, but that the type of farming has changed.  He added agriculture is ‘a key element or rural character and needs to be a high priority for action. “Alternative” farming is occurring:  pick your own, agri-tourism, hydroponics, direct sales to consumers, winery.’  He added that keeping the counthy’s existing 39 percent protected open space goal ‘will be a major challenge’ and that ‘39,000 additional acres are needed to meet the goal, but the pool of land is limited.  It will require significant efforts by the county in the next few years.’

“Graham concluded that, if the county does not change its policies, the rural area will be ‘dominated by large-lot residential development with little contiguous open space and significant loss of agricultural lands.’  He pointed out that, though this would not be the desired result, it would be consistent with the existing comprehensive land use plan and zoning regulations.

“Graham said the comprehensive plan ‘has a functional definition of the rural area, but not a vision’ for it.  He observed the rural area has a variety of activities and lifestyles connnected with rural areas, including different types of farming, low-density housing, rural businesses, cultural heritage, recreation and perservation and enjoyment of the natural environment.

“ERM suggested the county’s goal for land preservation should be 17,000 acres, which is 60 percent of the remaining undeveloped property in the rural area.  A purchase of development rights (PDR), where property owners get cash, but the land stays in productive use, should be started.  There also should be incentives for rural cluster development and a requirement for more preserved open space.

“The agricultural (A-1) zoning, allowing one home per ten acres, needs to be kept, but the policy needs to have flexibility ‘in locations where adjustments would advance the vision of the rural area. [no closed quote as published]   Enhanced cluster development could take place in areas dominated by farming, and sewer lines could be extended ‘in selected rural areas to achieve character, land preservation and environmental goals.’

“Consultants and the county sought input for the study on the Rural Crescent from residents through public meetings, workshops, surveys and focus groups.

“Wally Covington (R-Brentsville) told supervisors he is concerned with how the report and its implementation will impact farmers in the Nokesville area.  He blasted the Nokesville Sector Plan done several years ago, saying ‘nothing was a greater failure,’ and adding he ‘has a problem every month with it.’

“Covington said his goal is to promote the farm areas of the county and ‘give choices in the rural area.  Today we’re not doing that.’ ”