“The Prince William Board of County Supervisors unanimously agreed to increase county proffers Tuesday, and adopt the new monetary guidelines as set forth by the county planning department.

“Proffers are defined as monies the developers voluntarily provide to a jurisdiction in order to pay for services the new residents would use or require. The county last revised its proffer guidelines in 2006.

“Chairman Corey Stewart (R) commented this was one of the rare occasions when the supervisors have voted in unison. The proffers, which have not been updated in eight years, were lagging behind neighboring jurisdictions.

“According to Prince William Education Association President Jim Livingston, who spoke during Citizens’ Time, low proffers have inhibited the school district from directing more money towards the education of students, since so much of it has needed to be funneled into the construction of new schools.

“Specifically, Livingston said Prince William ‘would get an additional $125 million dollars if we charged what Loudoun County charged (in proffers). That money could be put to very good use.’

“However, Coles District Supervisor Marty Nohe (R) explained that while some media outlets are reporting what the schools have received in proffers, those numbers overlook the land, roads and parks that have been proffers to the county directly though not accounted for monetarily. He told Price that perhaps they should figure out a method for incorporating those costs in their records. 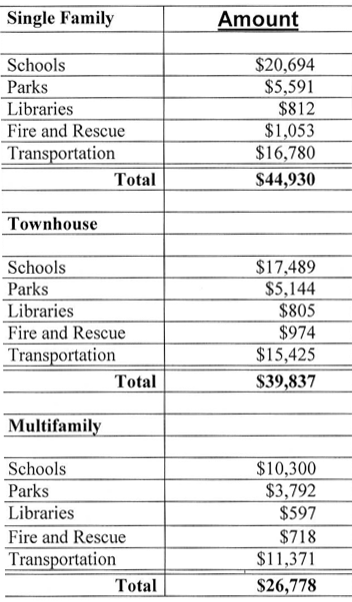 “Price said they could, but they would have to figure when to assign the monetary value to the land. He added that sometimes land is worth more than its market value, because its location is so useful to the county in the building of a school or fire station.

“While supervisors were willing to vote on the motion without much prior discussion, there were varying opinions raised about the proffer increases during Citizens’ Time.

“One resident questioned Planning Director Chris Price’s formula for deriving the new proffers. Rather than estimated costs for new schools, he suggested the county look at most recent costs and then average for market inflation. By this method, he calculated, proffers would decrease by $3,000, which he believes is a more accurate representation of the service needs required by proffers.

” ‘The projects should not exceed actual capital costs,’ the speaker argued.

“However, Price said his method is more prudent. Relying on past year’s costs could prove unreliable for schools, because it does not take into consideration additions and renovations. Likewise, for construction projects, such as libraries, looking at the last year in which one was build would be not accurately help to predict future costs, since they are built so infrequently, Price explained.

“Price said his staff would be willing to looking into that, but it would not be included in the current changes.

“Prince William County supervisors did receive information provided by the Northern Virginia Home Builders Association prior to their vote.
“Details of the proffer changes can be found on the Prince William County government website or by clicking here.
“Read a previous Bristow Beat article about Chris Price’s proffer proposal to the BOCS here.”

Board Votes on Balanced Growth Issues