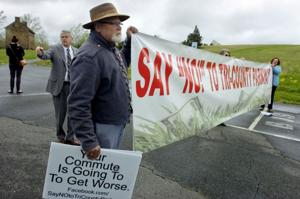 [Pictured:  “Alan Johnson (left) and Philomena Hefter, both residents on Pageland Road in Gainesville, hold a banner that says ‘Say “No!”  to Tri-County Parkway’ during a 2013 protest. Behind Johnson is state Senator Dick Black (R-13th).”]

“The controversial planned Bi-County Parkway was dealt yet another blow this week.

“In a surprise move Tuesday, the Prince William County Board of Supervisors voted 4 to 3 to remove the future 10-mile roadway from the county’s long-range planning blueprint, known as the ‘comprehensive plan.’

“The vote was unexpected because the board verbally agreed March 8 to open a public hearing on matter Tuesday but delay their vote until April 5 because Chairman Corey Stewart, R-At Large, said he would be traveling for business and would not be able to attend the March 15 meeting.

“But those plans apparently changed when the road’s opponents realized they had the votes needed to extract the Bi-County Parkway from the comprehensive plan.

“Candland said Thursday several supervisors believed the parkway had been debated long enough and that many believed their voices  ‘would be diminished’ if the vote were delayed.

“ ‘It was time we addressed it,’ Candland said.  ‘The vote was a big win for the citizens of Prince William County who have been held hostage by this poorly designed Bi-County Parkway routing plan.’

“Principi said he tried to protest the vote by reminding his fellow supervisors of their public statement March 8 promising to move the vote to their first meeting in April.

“But County Attorney Michelle Robl advised that because the board never voted on the delay, the verbal agreement was not binding.

“ ‘That is just dirty politics,’ Principi said Thursday. ‘It’s just not good for our community.’

“The parkway, which has been on state and local long-range transportation plans since the 1980s, would extend Va. 234 north to U.S. 50 in Loudoun County. The road is planned to be a four-lane, limited-access parkway that would ease trips between Prince William and Loudoun counties and open up another access point to Dulles International Airport.

“The road is considered key to accommodate current and future population growth and as well as economic development. For that reason, it is widely supported by business and development groups.

“But the road is also planned to skirt the western edge of the protected Manassas National Battlefield Park and is considered a threat to the county’s rural crescent, where residential development is limited to one home per 10 acres. Both are key points of contention for the road’s many opponents.

“Caddigan has been a vocal critic of the parkway because residents in neighborhoods along Va. 234, including Montclair and Ashland, fear it would draw heavier truck traffic between Dulles and Interstate 95.

“Supervisors were cautioned against removing the parkway from the comprehensive plan, however, by both the Virginia Department of Transportation and their own transportation department, because of the effect to other roads in the county.

“According to VDOT projections, the loss of the parkway would exacerbate congestion on nearly every other main north-south artery in the county, including Va. 234, Prince William Parkway, U.S. 15, Sudley Road and Pageland Lane.

“Also, the move could come with a big price tag. VDOT has already purchased right-of-way property along Va. 234 for which it could now ask the county for reimbursement, according to a VDOT staff report.

“It is not immediately clear how much the county might have to pay the state, however, since those details were not included in the report.

“It also remains unclear what effect the supervisors’ vote will have in the long term, considering the parkway remains on state long-range plans as well as those in Loudoun and Fairfax counties.

“Principi said he, too, has ‘issues’ with some aspects of the Bi-County Parkway as planned, but contends that taking it off the county’s transportation blueprint is not the responsible way to deal with those challenges.

“ ‘The vote on the Bi-County Parkway was a vote to stop that other conversation,’ Principi said.  ‘The system is broken if we don’t build this road.’ ”